How the Election May Impact U.S. Supply Chains & Manufacturing

Perhaps not since the Second World War has the U.S. supply chain been so prominent in national conversation. The ongoing global health crisis has revealed some vulnerabilities in getting critical goods to businesses and consumers. In July, the Biden campaign published its framework for securing the U.S.’s supply chain for not only vital medicine and medical equipment but a range of other materials and technologies. Some pieces of the Biden plan have already been enacted by the Trump administration—for example, mandating energy and power generation parts be sourced domestically. There’s a lot to unpack in the Biden plan, and we won’t address every detail here. Still it’s useful to paint a picture of how the major components of this plan could shape the landscape of the U.S. supply chain and how they might impact real estate.

Front and center in the plan are presidential powers to mandate how critical items are produced, procured and stored. Among them are the Defense Production Act (DPA) and the Procurement Act of 1949. The first gives the president the power to require companies produce certain goods domestically. The latter leverages federal purchasing power. No doubt these acts will have an impact on production. In the case of the DPA, because it would also require significant stockpiles of goods, the effect would multiply beyond manufacturing. As an illustration, consider a Cushman & Wakefield healthcare client that prior to the pandemic used about 50,000 square feet (sf) to store personal protective equipment (PPE). That same client is now looking at 500,000 sf for its PPE. Not only does that dramatic increase in storage capacity create a real estate challenge, it also requires considerations around the systems, equipment and automation to operate a 500,000-sf facility and to store ten times as much product. We fully expect to see that level of increase for companies across impacted industries—semiconductors, key electronics and related technologies, telecommunications infrastructure and key raw materials are all noted in the Biden plan. The plan indicates those companies will be compensated for excess production and storage capacity, but how they get compensated remains unknown.

Because of the U.S.’s heavy dependence on medicines and ingredients currently produced overseas—upwards of 70-75%—it’s unsurprising that pharmaceuticals are a key focus area of the Biden plan. The Trump administration has been focused on this challenge as well, just having utilized the DPA for a first of its kind loan to Kodak for $765 million to produce drug ingredients domestically. The risk of not having the ability to manufacture, store, and distribute pharmaceuticals in the U.S.—not to mention the equipment and infrastructure to make it all possible—is acutely apparent. But the real test of those capabilities will come when a successful vaccine for COVID-19 is developed, given the scale of that demand.

Another piece of the plan that will play a major role is the Biomedical Advanced Research and Development Authority (BARDA), which will provide incentives to increase the production of medicines and vaccines in the U.S. Between Medicare, Medicaid, the Department of Veterans Affairs, the Food & Drug Administration, the Centers for Disease Control, and the Department of Defense, the spending power of the federal government is enormous. And because that spend will come with mandates for domestic sourcing, the spending power should further influence the increase of domestic production and storage of those medicines and vaccines.

A final lever worth noting involves corporate balance sheet incentives which will drive domestic production behavior. While incentives, tax credits, matching funds and so forth are at play today at state and local levels, the federal dollars will radically change the game. Companies that are making decisions today will likely make very different decisions tomorrow, having to consider several unknowns. How long will a federal subsidy last? What happens when demand goes away? Reckitt Benckiser is a good example of a company that has already been forced to manage the unknowns and shift production. Rather than increase total manufacturing capacity when faced with unprecedented demand for its Lysol wipes, the company reduced production on other SKUs to accommodate the shift. Unilever, too, had to quickly respond to new and sudden demand. The company was able to ramp up a more than 140-fold increase in the output of its hand sanitizer by utilizing more than 60 of its manufacturing sites where formerly it had used two.

So What Does it Mean for Industrial Real Estate and Labor?

Should the Biden plan be realized, it will have far reaching impact on industrial real estate, both manufacturing and warehouse-distribution. Despite the economic headwinds caused by the pandemic, U.S. industrial real estate markets remain healthy. Vacancy rates are low and we are even seeing rent growth in markets like Nashville and Phoenix, each of which reported second quarter 2020 rental rate increase compared to second quarter 2019. In some markets, opportunities for large manufacturing or distribution projects are scarce. The Memphis area is a perfect example. If a company has a need for 500,000 square feet of distribution space today, they will not find it in that market. Similar examples can be found in manufacturing. The measures in the Biden plan will only increase demand, and while that bodes well for the continued health of the industrial real estate market, it may create real estate challenges for the companies that need to shift quickly to produce, store and distribute greater quantities of vital goods.

In terms of labor, references to job growth in the Biden plan may be more about politics than reality. That said, the shift of production of critical goods back to the U.S. will impact labor, but in ways that may be counterintuitive. Tesla serves as a good case study. The recently-announced selection of Austin for a second U.S. plant will make a significant economic impact to the area. Large manufacturing projects bring a host of suppliers, creating a multiplier effect, which increases labor demand even further. What we’re likely to see is that Tesla and its suppliers will find plenty of labor, but they will draw that workforce away from other industries, possibly creating industrial labor shortages elsewhere.

The Biden plan does call for workforce training, though expectations around the return of manufacturing jobs might be tempered here as well. Skilled manufacturing jobs pay more than distribution and they require more training. Additionally, it’s easier to automate manufacturing, which calls for relatively simple repetition versus the complexities of warehouse automation. So increased domestic manufacturing will likely come with heavy automation, and thus fewer total jobs. And the jobs it will demand will likely be the kind that require much more than a few weeks of training.

It’s worth noting that as a result of tariffs and ongoing trade disputes, and in addition to the United States–Mexico–Canada Agreement (USMCA), many companies had already made decisions to shift some production, either back to the U.S. or to locations like Southeast Asia or Central and South America. So, while the health crisis has ignited some urgency and will no doubt impact the size and scale of the effort to rebuild domestic capacity, it’s accelerating a trend we were already witnessing. But what’s clear is that the actions suggested by the Biden plan would greatly influence the behavior of the companies that produce, store and ship critical goods. And it’s possible that the speed and breadth of the shift could be on a level we have not seen in decades.

To learn more about what's next for the Industrial sector of commercial real estate, click here.
Subscribe

2020 Global Manufacturing Risk Index assesses the most suitable locations for global manufacturing among 48 countries in Europe, the Americas and Asia Pacific.
Lisa Graham • 6/25/2020

The industrial property segment, known as a top performing asset class, continues to remain resilient despite the challenges COVID-19 and the accompanying economic recession have brought forth.
Jason Tolliver • 9/10/2020 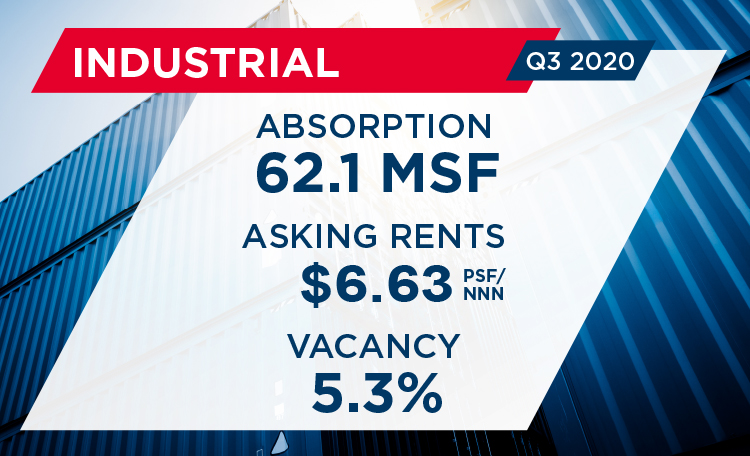 Cushman & Wakefield uses cookies to analyze traffic and offer our customers the best experience on this website. Close this dialog to confirm your consent, or visit this page to learn more:
Cookie Notice